History of the Mills House 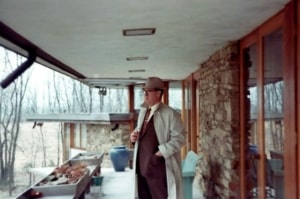 In 1955, businessman Ernie Mills purchased the plot of land at 944 Fry Road with a dream in mind. Mills owned Monarch Cabinet Company, “Tops in Tops,” a cabinet and countertop business, and his goal was to build a home showcasing his products. A long-time fan of Frank Lloyd Wright’s work, Mills wanted to model his home in Wright’s classic Usonian style.

Ensuring his goal would be accomplished, Mills traveled to the famed architect’s home in Wisconsin on several occasions to discuss ideas for the home’s design.  He even fashioned models out of balsa wood to give Frank Lloyd Wright a more realistic picture of what he had in mind. Finally, when Mills settled on a final design, it was time to break ground.

The home was to become an icon for mid-century modern architecture.  In keeping with the style, Mills planned a flat roof with cantilevered overhangs and clerestory windows. He also planned lush gardens and elaborate landscaping to create a peaceful setting among nature. 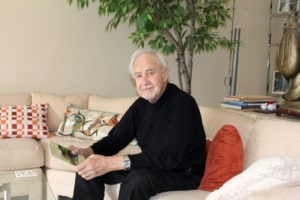 While Frank Lloyd Wright lent valuable input on the design of the home, Mills needed a local architect to draw the blueprints and turn his model into workable plans.  So, he went on the hunt for the perfect architect to carry off the construction of this dream home.  Serendipitously, he was connected to up and coming architect, Harry Cooler. Cooler was just getting started making a name for himself in the industry. But he came highly recommended enough to pique Mills’ interest.  When he learned that Cooler graduated from the University of Illinois and studied under Frank Lloyd Wright, those were just the magic words Mills needed to be convinced that Cooler would execute his vision for the home masterfully.  The budding architect would later go on to complete several high-profile projects like the Burger Chef design and the administration building at the Weir Cook Airport. 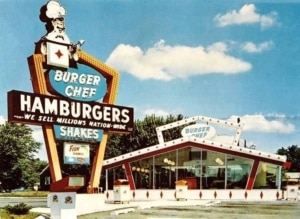 During construction, Mills and his wife Edith, along with their daughter Susan (Susie), would come to the property to clear the brush.  During those early visits, the family noticed a gentle breeze coming from the south, and that’s how the home earned its first nickname, Southwind. The family also made trips to Brown County in their Chrysler New Yorker and hauled natural stone to wrap the house.  The stone wrap was yet another feature carrying out Mills’ vision of accentuating nature.

Construction was complete on the home in 1956 and the Mills family finally moved into their dream home.  The tri-level mid-century modern showplace stood out not just for its unique exterior.  True to his word, Mills decked the house with all the greatest modern features, many of which were way ahead of its time.  Copper tubing heated the home and it was air conditioned – a luxury in that age.  Modern appliances adorned the kitchen, wrapped by countertops and cabinets from Monarch Cabinet Company.  Contemporary furniture, yet homey, filled the home, as did green bathroom fixtures. 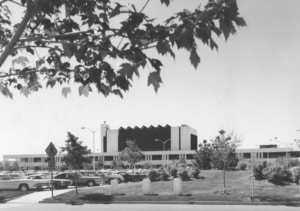 Through the years, the Mills and their home played host to dozens of gatherings.  Mrs. Mills threw many parties for Susan’s school friends, bridal showers, parties for Ernie’s Duesenberg club.  Edith even hosted a dinner party for Fred and Augie Duesenberg’s mother.  Susan’s wedding reception was also held at the house and was quite a memorable event.

After many years and beautiful memories, the Mills family sold the home.  Two other families lived in the home, and the final owner converted it to a law firm.  After the law firm closed, the home fell into disrepair.  No attention was given to the badly deteriorating roof, ruined by years of water collecting, unable to drain from the flat surface.  The landscaping became overgrown and unruly.

Light was dimming on the once grand structure, an icon of its era and beacon to all who lived in the community.  Filled with memories, the home continued to draw looks as locals drove past hopelessly wishing they’d see a for sale sign so someone would buy the home and give it the attention it deserved.  Sadly, the Indiana Historical Landmarks Society put the home on its ten most endangered list, hoping to prevent a total erasure of history for the simple and idyllic era, beautiful architecture and the connections made outside and within its four walls.

Then, one day in December 2018, one of those locals who’d passed the fading home hundreds of times, passed it one final time getting a surprise that would change his life and the southside forever.

Todd Anthony, owner of local business discountfilters.com, saw a FOR SALE sign in the yard.  The Perry Meridian alumnus, and native Southsider had long admired the home.  The FOR SALE sign was like a dream come true for Anthony, a huge fan of the 1950s era and Frank Lloyd Wright architecture.

What followed was a whirlwind.  Anthony called to make some inquiries and made the deal happen in a matter of days.  By Christmas break, he and his brother were in the house clearing debris with Sinatra tunes cranked in the background.

When he began the project, Anthony knew nearly nothing about the history of the home or the families who lived there.  He was driven solely by his inspiration of his love of the era and the architecture, and his mission was simply to complete a home renovation and save the home.

It wasn’t long before Anthony and his crew began to uncover little gems that left him intrigued and eager to find out more.  He started to learn about the Mills family who built the home, and Ernie Mills’ affinity for Frank Lloyd Wright architecture.  He felt an almost immediate connection to Mills and to Frank Lloyd Wright.  Miraculously, Anthony and his crew uncovered those original blueprints along with some leftover copper tubing.  Then he learned about the architect who drew the house plans. 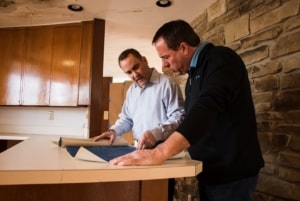 With a nearly unmanageable roof issue to resolve, he did a little research and found the son of the late architect Harry Cooler.  Bill Cooler was delighted to learn of Anthony’s plans and jumped in to connect him with a structural engineer to immediately begin saving the roof.  Bill also designed a deck rail to match that of his father’s existing interior stair rail. 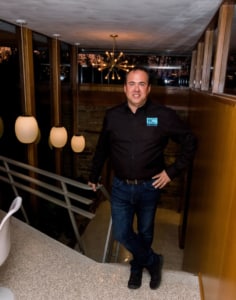 As the weeks and months passed, local residents shared their memories of being in the home or passing by admiring it.  The unexpected connections descended like wildfire, crossing generations and state lines.  But no connection was more powerful than that of Susan Mills England, the daughter of original owners, Edith and Ernie Mills.  Now living in Ann Arbor, Michigan, she heard about the renovation and shared memories of her parents, the home’s construction, photos and stories about the parties held at the home.

Eleven months of painstaking work went into the restoration of this magnificent structure, returning it to its former glory.  During construction, friends and family, local contractors and more contributed their blood sweat and tears to make the project happen.  Each and every person no matter how large or small their job knew instantly the project was a special labor of love, including Todd Anthony.

Now, Anthony is pleased to present the home to the public, complete with contemporary furnishings, period pieces, modern appliances with retro facades, all for an authentic effect, not to mention lush gardens and elegant landscaping, befitting of a home so rich with history and memories.

“I am delighted to have played a small part in this preservation of history so unique, especially to Greenwood. It is a gift from all those involved for generations to come.”